So, there it was, the formidable London marathon – my first race for 2018, second road marathon since I started running, and first race back after my stress fracture. Needless to say that I was super excited and scared at the same time!

After a short stop-over in Germany to visit my family and friends, I arrived in London on Thursday night, 2 days prior to race day, and crashed on the couch of my lovely Belgian friend Claire. I was super stoked to be back in London, the city I have called home for the last 4 years and I absolutely love (even though there are no mountains in sight ;). The next day, the alarm went off bright and early in time for Advent Running’s Fast Friday session along the canal – I was just plodding along and shaking out the legs while catching up with running friends but nevertheless the sweat attack was real (7 am and it was already 18 degrees). Fuelled by a post-run breakfast, I ventured to the VLM expo to collect my bib, grab all the free goodies (mainly food of course), and take the obligatory pre-race pics. Seeing the crowds at the expo really got my nerves kicking in and all I wanted was to get running in order to quiet them 😉

My first marathon had been a year ago. Back then, I raced through the streets of Manchester in a time of 3:26:46, with more in the tank as I had raced conservatively due to my fear of hitting the dreaded wall. So this time, I wanted to race harder (but still not meet the wall). But this time around, I also carried the mental burden of a stress fracture I endured 8 months ago. While my foot is healed and I am back running (and loving it), no one had prepared me for the mental challenges following a fracture. It might look like an amusing game of mine to jump on every green, grassy patches I can find along the tarmac, but it is actually a stressful experience running on road as my brain constantly shouts at me ‘Stop. Don’t run. Don’t run on road. Watch out, it’ll break. It’ll BREAK!’. As a neuroscientist I am aware that I need to retrain my brain to let go of my fear of road running so London was supposed to be the ultimate test. Overwriting the stressful experience of fastish road running with the exhilarating atmosphere of running through London’s roads, supported and cheered on by friends, and having a blast (always main priority ;).

Race morning and I was frankly pooping my pants. I had been training in sub-zero temperatures and working on my strength by ploughing through knee-deep snow and ‘running’ (actually it more often was like crawling) up mountains, but these conditions did not allow for any proper speed work. Not that I am a lover of speed work anyways and these conditions actually provided me with the perfect excuse to avoid any speed (yay). But on race morning, I was doubting that my legs had any speed left in them or would allow me to maintain any speed over prolonged periods of time, let alone in rather hot conditions as encountered on race weekend thanks to a heat wave hitting London. The few runs I had done in Germany were also far from being a confidence booster as I constantly had to stop due to nasty side stitches. I normally do not suffer from stitches but figured that it might be related to the change in altitude – my running in Canada takes place at an altitude of 1000+ metres. But nevertheless, I wanted to give it my best try – Go hard or go home style 😉

I munched my porridge and downed a glass of water with a dissolved hydration tablet before jumping on a bus to get to the start. Typical for London, the bus driver suddenly announced that ‘this bus terminates here’ (what???). Not knowing where exactly I was, I blindly followed the other easy-to-spot London marathon runners to a DLR stop and took the train to Greenwich. After briefly meeting my friend Mark, who had run the reversed marathon (nohtaraM) through the night, and receiving a short pep talk from him, I walked to the start zone. By that time, the hydration tablet had worked its magic and I queued with thousands of other runners in front of lovely portaloos (what a bliss). After wishing good luck to a bunch of friends who were running as well (check out Julia’s incredible feat of 4 sub-4 marathons in 4 weeks), it was time to line up in the start pen.

The gun went off, out on the race course we went and into the streets of London. I quickly settled into my pace (4:30 min/km) while weaving around fellow runners and soaking up the incredible atmosphere of running with thousands of other runners and being cheered on by massive crowds. This is rather different to trail and mountain races where you’re on your own for large portions of the race. To be honest, the sheer amount of people and noises were slightly overwhelming for me. Notwithstanding, this exhilarating atmosphere made the miles fly past while the temperature was creeping up  to a high of 24 degrees as the race went on. The hot weather soon started to take its toll on runners – it was uncomforting and sad to see fellow runners struggle already prior to the half-way mark, knowing that they had trained hard to achieve their goals. Like most other runners, I decided to cool my body down by bucketing water over myself (quite a fun game). I also made sure I took my gels (2 GU gels without and later 2 with caffeine – I like the caramel one, yummy) in regular intervals and topped it all with some Lucozade that was handed out along the course. Luckily, my stomach was able to handle this sugary mixture! 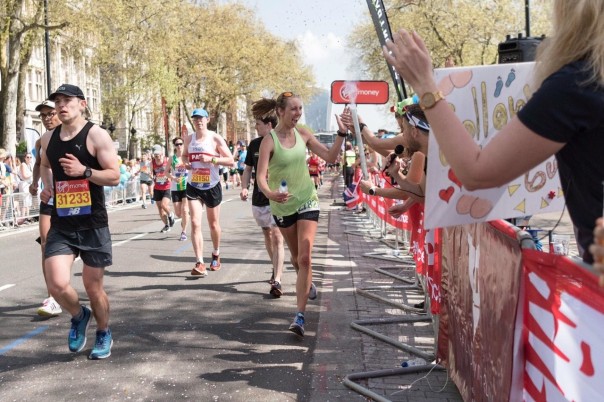 Despite the heat, I felt comfortable throughout the entire race. Nevertheless, I was looking forward to seeing friends out along the course to gain momentum to keep on pushing and obviously, get some high-5s in ;). In particular, I focused on getting to mile 14 where the Cool Cats crew was cheering and later to mile 21 where the Advent Runners put on a party. Having cheered on runners at the London Marathon last year, I knew Advent runners were having a blast and seeing them would give me another boost of energy to carry me the last 3 miles to the finish. When I reached mile 21, Advent runners did not disappoint – I felt like I was flying, carried by the shouts of encouragement (I was again overwhelmed by this experience). The last 2 miles, I noticed how my head was not fully in the game anymore and I simply wanted to finish…Enough of this pavement pounding, I thought to myself. Then, there was the home stretch with Buckingham Palace in sight, I decided to push the power button for the last few 100 metres. Bam, finished!

The official time was 3:14:11 – a time I was slightly disappointed with as I paced myself for a 3:10, but being a rookie when it comes to road running, I relied on my watch rather than the actual marathon markers (dummy!). Lesson learned for next time 😉 But in hindsight, I am happy with my achievement in these hot conditions – apparently it was the hottest London Marathon on record. More importantly, I had a blast and felt comfortable throughout the race and thus, was able to experience the magic of the London Marathon! Maybe I’ll be back next year…maybe.

Thanks to Claire Clifton Coles for capturing some running action.